For its annual planning session, Raptor was looking for an external facilitator that would allow all participants to be actively involved in discussions and to create a space that enabled all voices to be heard. By hiring Maven, the team had a structure to the day as well as an experienced, professional consultant who could provide relevant input throughout the day.

Leading up to the one-day session, the Maven facilitator interviewed several of the attendees to understand their goals, priorities and to gain awareness of any internal agendas or politics. With this information he created an agenda for the day that began with an exercise to articulate the company’s strategy. This exercise ensured that all attendees were on the same page, so future discussions would be vetted against the group’s agreed to strategic direction.

The group brainstormed approximately 50 different growth opportunities, narrowed those down to 20 initiatives and prioritized them. In addition, they defined owners and created a plan. Through the session, the Maven facilitator took notes and pictures and guided discussion through the lens of a professional management consultant. His experience in many of these types of planning sessions across a variety of industries gave the group an outside perspective they would not have had without a third party.

At the end of the the day, the Raptor Technologies executive team experienced broader discussions, built consensus around the ideas with the greatest potential, conducted third-party pressure test and had documented next steps to ensure the momentum built would carry throughout the year.  That combination means more effective interaction at the executive level, consistent messaging throughout the organization and less wasted human and financial resources. Raptor Technologies is well positioned to attack its next year’s initiatives.

Maven partnered with the C&W and B12 executive teams to facilitate the development of a new growth strategy. Rowing in the same direction for continued growth.

Headquartered in Indianapolis, IN, CraftMark Bakery is a leading supplier of frozen bakery products to the food service and in-store bakery industries.

With a 225k sq ft commercial bakery and state-of-the art equipment and systems, CraftMark has rapidly grown to an industry recognized innovator serving some of the largest restaurants in the US.

Started in 2013 by industry veterans with backing from CIC Partners, CraftMark grew from zero revenue to a large business serving some of the nations biggest restaurant chains in 18 months.  There was not time to step back and write down the various aspects of the company strategy.  When they started, everyone knew it in their bones and just went and executed.  As the company grew to hundreds of employees and a long list of customers, it became more important to make sure everyone was rowing in the same direction. A few years ago, MUV’s owner was introduced to Maven Associates when he was seeking an outside facilitator for the company’s annual strategic offsite meeting. The meeting was composed of the management team as well as a few individual contributors, and was meant to set the next year’s strategic objectives. Prior to the meeting, Maven interviewed the attendees to understand individual objectives, uncover underlying agendas and hear first-hand expectations in an effort to facilitate a productive conversation.

Pulling from previous meeting templates and experiences, Maven designed a structured meeting agenda and over the course of two days, lead the team through their objectives, and served as secretary. Maven’s participation enabled all company attendees to actively participate in the discussions. Following the meeting, Maven provided a read out of the meeting with a summary of what was discussed, decisions made and a road map to continue the momentum.

The MUV team was so pleased with the outcome that they asked Maven to facilitate subsequent annual meetings. Over time, Maven determined that the team had a firm grasp of how to conduct the meetings and they would find more value by having Maven participate in their Quarterly meetings where MUV was finding that it needed support to standardize the agenda and hold the teams accountable to decisions made during the annual meetings.

MUV has seen substantial growth during its period working with Maven, and attributes some of that to the momentum, outside and unbiased perspective, and valued opinions that Maven brings to their strategic discussions. 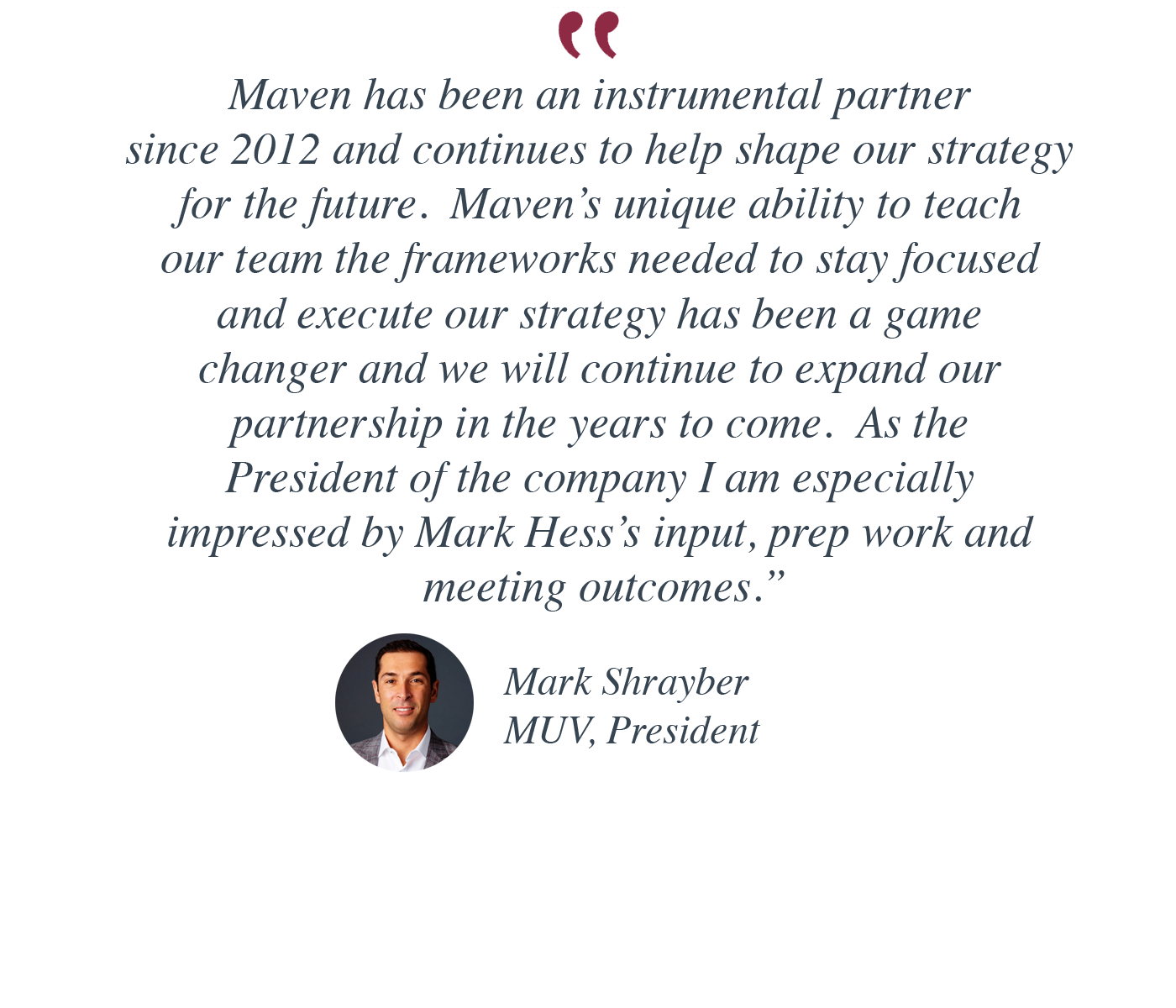