BOH, established in 1998 and based in Fort Worth, TX, manufactures and distributes durable shipping containers with secure interior storage units. The shipping containers are used for moving/storing various parts, tools and equipment during military deployments around the globe. BOH containers are shipped via ground, sea or air and enable military units to deploy on short notice and be up and operational quickly.

BOH is well-respected and its rugged, mobile, customizable storage systems are considered essential for Army installations all around the world. However, as the future of war shifts, BOH wanted to ensure it would grow and develop products to meet future military needs.

Having worked with its investment firm, Anchor Partners, on a previous project, Maven was engaged to help assess organic growth and potential acquisitions.  The Maven team was able to hit the ground running based on its past experience with this company and industry.

As BOH looked forward, it saw growth opportunities, but wanted to better understand how different growth opportunities would impact its future valuation. Through one-on-one interviews with industry experts, bankers, brokers, PE firms and future buyers, Maven was able to identify various levers (end markets, customer concentration, EBITDA margins, etc.) that would impact the future valuation.  Understanding the details of each “valuation lever” enabled BOH to adjust its strategy and to focus on activities that would benefit it in the long term. (Read more about how Maven approaches Valuation Projects.)

There are few situations in business that are new, and there is tremendous value in evaluating various competitors strategies. Companies can benefit from understanding the hard learned lessons that led to different companies successes. With this in mind, Maven reviewed the several competitors in the military supply space to determine elements that made them each successful as well as reviewing their strategies. The lessons learned during this research informed later recommendations, but first it was important to understand the future of warfare, in general.

The future of warfare

BOH’s core product feeds perfectly into the Army’s current operations. Large base installations in the desert delivered by sea on Navy vessels. Through secondary research and validated with expert interviews with former Generals, Maven identified several expected shifts in future warfare. While there would be changes, one thing would remain constant – equipment (tanks, planes, drones, etc) would need to be maintained in the field.  And BOH’s core product would be in demand, though in formats different than today. It was important for BOH products to adapt to this change to meet future military needs.

Based on its findings, Maven recommended a growth strategy approach that combined organic and acquisition targets. Organic growth opportunities included product features important in new combat situations as well as business development in other branches of the military such as the Air Force. Additionally, acquisition targets were determined based on a list of criteria and a short list was provided to the team for further discussions.

The three phases of this project helped craft a go forward strategy for BOH.  By understanding what will drive future valuations, how similar companies had succeeded and failed and where the market is headed, the Maven team was able to help the management team chart a course for future success.  With the new strategy in place, BOH will be in the right place at the right time with the right product. Located in Glenview, IL, Highland Ventures is a portfolio of retail businesses and real estate holdings throughout the upper Midwest and Texas.

The primary holdings include over 750 Family Video (home DVD rental) locations, over 135 Marco’s Pizza locations and ownership of 90% of the commercial real estate used by those businesses.  Other businesses include: Digital Doc, Stay Fit 24 and Highland Pure Water & Ice.

Highland Ventures dates back to 1946 when Clarence Hoogland established the Midstates Appliance and Supply Company.  For the first 30 years, the company focused on growing it’s appliance distribution business.  In 1978 Midstates opened it’s first video rental business and ultimately grew the video rental business and real estate ownership to over 750 locations.  In 2012 Highland Ventures partnered with Marco’s Pizza to rapidly expand their franchise base.  Over the following 5 years 135 locations have been opened making Highland Ventures the largest franchisee of Marco’s Pizza.

The focus on the rapid growth of the Marco’s business enabled operating inefficiencies to develop.  The Maven team worked with the Highland Ventures leadership to identify opportunities to improve profitability.  In the first phase of the work, a comprehensive profit diagnostic was conducted across the entire business.  Immediate opportunities were identified and communicated to the executive team.  In the second phase of the work, the largest and most promising opportunities were analyzed further.  A detailed roadmap of go forward actions was developed to provide the executive team with the guidance they would need to realize results. Profit improvement for an aerospace and defense manufacturer

For more than 40 years, the Cherokee Nation Industries (CNI) family of companies has operated as government contractors in aerospace and defense manufacturing.

For several years, CNI’s profitability was not meeting expectations. Maven was engaged to provide recommendations to CNI management on how the business could improve profitability. In the first phase of the work, a comprehensive profit diagnostic was conducted across the entire business where the Maven team identified 25+ profit improvement opportunities. In the second phase of the work, the 10 best opportunities were refined and action plans for achieving the results were develop in conjunction with the CNI management team. 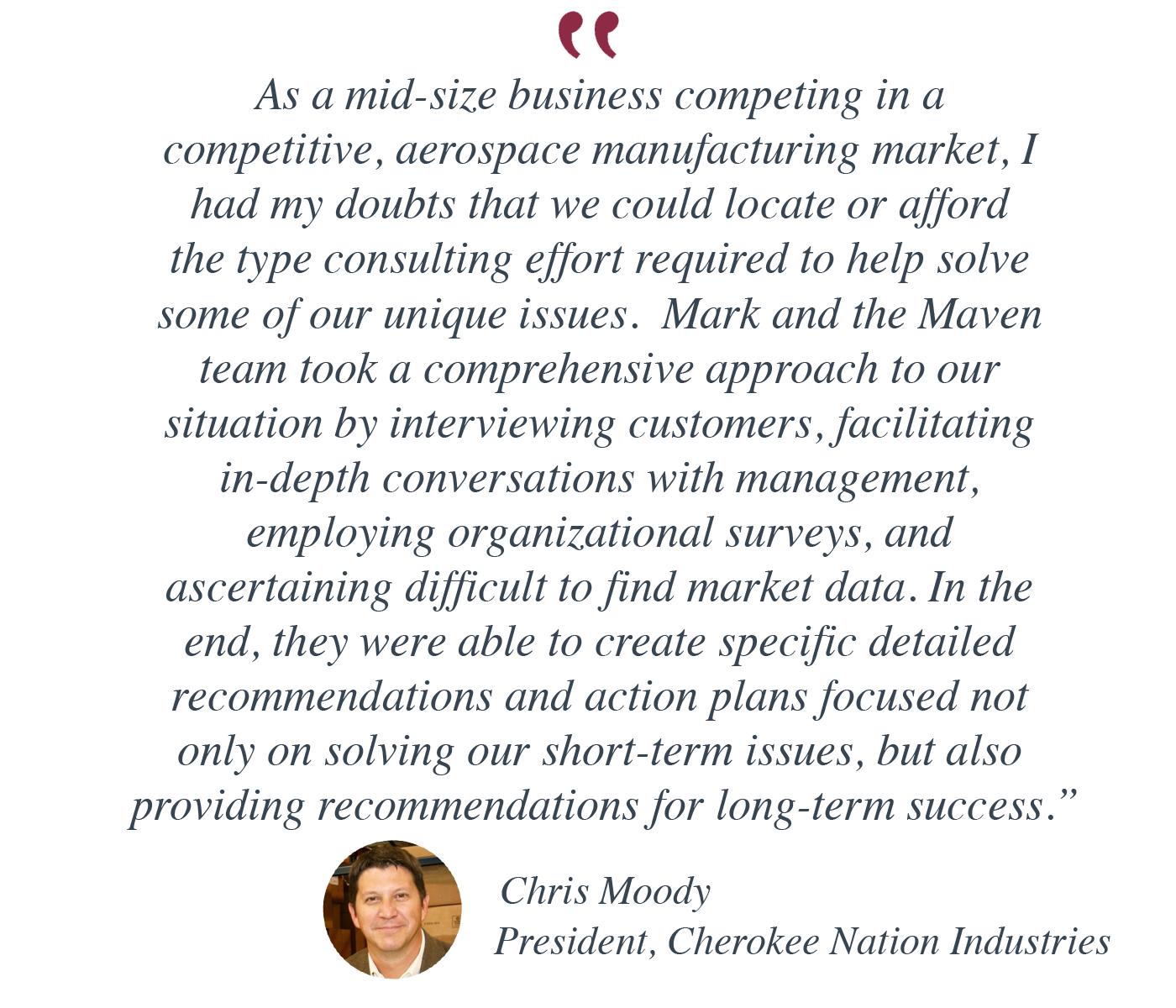 Data and technology to transform marketing

Acxiom is an enterprise data, analytics and software-as-a-service company that uniquely fuses trust, experience and scale to fuel data-driven results.

For over 40 years, Acxiom has been an innovator in harnessing the most important sources and uses of data to strengthen connections between people, businesses and their partners. Utilizing a channel and media neutral approach, we leverage cutting-edge, data-oriented products and services to maximize customer value. Every week, Acxiom powers more than a trillion transactions that enable better living for people and better results for our 7,000+ global clients.

Maven was engaged by Acxiom to benchmark their cost structure against various competitors and business in similar industries and to evaluate the efficiency of the current organizational structure. Internal cost benchmarks were developed by comparing similar groups that differed by geography and customers served. Cost benchmarks to external organizations were developed thru interviews, research reports and financial analyses. The efficiency of the organizational structure was evaluated by analyzing the spans and layers throughout the company. The results of the various analyses were synthesized and recommendations for cost reductions and new budgets were developed. The largest producer of aftermarket hydraulic seals for the elevator market in the United States.

Located in Mesquite, TX, Texacone is the largest producer of aftermarket hydraulic seals for the elevator market in the United States.

Texacone has a full range of products including urethane, rubber coated fabric and elastomer coated fabric seals.   In addition to the elevator industry, Texacone provides hydraulic and pneumatic seals to other industries including cotton ginning, steel production, oilfield, aircraft, chemical and power.

Maven Associates worked with Texacone and Anchor Investments to evaluate a range of growth opportunities.  Over the 10 week project, Maven consultants collaborated with the Texacone team to build a solid growth strategy and a roadmap for implementation.

Recognizing the value of using profit opportunities to drive growth.

When PCI acquired its largest competitor, their size doubled, and the PCI management team recognized the value of having an outside perspective to create additional value from the acquisition. Additionally, the team understood that profit identification could self-fund future growth initiatives making the new business even stronger. Its owner was a Stagen Business Leadership Program alum and knew Mark Hess well and wanted Maven’s specialization in assisting niche companies to guide PCI through the process.

Maven and PCI agreed to begin with the profit identification process. Recognizing that companies often have profit optimization ideas not yet explored, Maven facilitated a brainstorming session with PCI to bring those ideas to the surface. Those along with the Maven’s thoughts were prioritized. Maven then analyzed the top ten ideas to better understand their full potential.

Once the profit improvements were identified and handed off for actioning, Maven was then able to begin to uncover the growth opportunities.

Maven often applies a Profit From The Core approach to growth initiatives. Profit From The Core is a business book written by Bain partner Chris Zook which outlines several Bain methodologies for uncovering growth opportunities. This main focus is leveraging existing strengths and core founding principles of the company before looking more broadly. Dismissing core strengths during growth initiatives is common among mid-market businesses. As an outsider, Maven considers all options and brings in experiences from other companies and industries. Similar to the process employed during the profit hunt phase, Maven brainstormed and prioritized the big opportunities and then went away to determine the best growth opportunities.  They returned with a business case and roadmap to capitalize on those options.

The top five growth opportunities recommended were to add more SKUs and reduce delivery times for the apparel business, to include personalized alumni stories in the alumni directories in an effort to appeal to the changing audience demographics, improve fundraising efforts, and new activities to increase alumni organization membership. Beyond the ideas and the business case delivery, Maven added value by providing a roadmap and metrics for success, as well as project management and accountability to see the projects through completion.

Publishing Concepts Inc. understood that profit and growth go hand-in-hand with profit improvements funding growth initiatives. It also understood that it required an outsider’s perspective to filter the less rewarding and to highlight those likely to succeed.  This two-pronged approach catalyzed the business following a major acquisition as well as set it up for continued organic growth. WorldStrides, based in Charlottesville, Virginia, is the nation’s largest provider of supplemental educational student travel programs.

Although WorldStrides had grown significantly in the past decade, with the top line experiencing tremendous growth, bottom line results were not up to expectations. Carlyle Group introduced WorldStrides to Maven Associates. Carlyle knew that Maven could provide top tier consulting expertise and look at the opportunities with an “owner” mentality. It is sometimes the case that big opportunities are not part of the project scope.  But if your consultant looks at the business as though they owned it, they will surface those opportunities for consideration.

One such recommendation was to upgrade Worldstrides’ IT system. The system was a conglomeration of homegrown and sunsetting systems that had not received much investment in the previous two decades. Maven’s review estimated that significant cost savings could be unlocked with a migration to modern Saas platforms.   To execute, Maven assisted in hiring experts in IT strategy to help Worldstrides understand the best approach. Worldstrides is near completing this digital transformation with a new CRM, new financials system and better payment methods/processing.  The review also uncovered more risk with sunsetting systems and business continuity than was previously known.   Making this recommendation more valuable than initially estimated.

Finally, one big discovery was for Worldstrides to take a broad review of its pricing approach and to hire a pricing expert. Since the Maven engagement, Worldstrides has implemented a structured annual process and strategy for reviewing pricing.

As often happens with mid-market companies, Worldstrides knew they could improve their business, but was unsure of where the biggest opportunities for growth and savings resided within its system.  Maven was able to shine light on those areas that had slipped and then create a roadmap for discipline and rigor that enabled Worldstrides to see top line and bottom line growth.